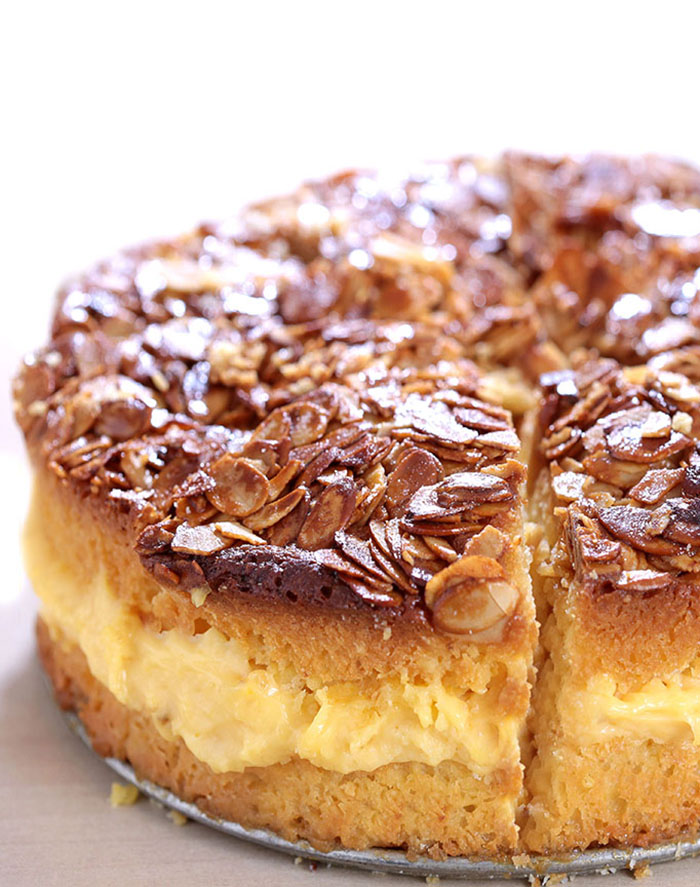 It’s one of the best desserts in Germany, absolutely wunderbar!
Everyone who tries this German Bee Sting Cake LOVES it. Whenever I make it, it disappears quickly!

What is Bee Sting Cake?

Bienenstich Kuchen – or Bee Sting Cake – is a traditional German dessert that is being made from a yeasted dough like a brioche bread. Topped with crunchy, buttery, honey-and-almond topping, and filled with creamy custard filling, Creme Patissiere or plain vanilla pudding.

This is a perfect cake for afternoon tea as it is for dessert. The wonderful topping makes this cake so special. It is crunchy and ooey gooey together and it caramelized to perfection. Simply heavenly!!

Why is it called Bee Sting Cake?

There are many stories surrounding this rather unusual name. One story is about two royal pastry chefs who stole honey from a beehive on the banks of the Rhine in 1474, to bake a special cake for their king. Apparently bee sting cake was the result – possibly because of the numerous stings they encountered. Other story was that the baker who invented the cake was stung by the bee which attracted to the sweet honey topping. 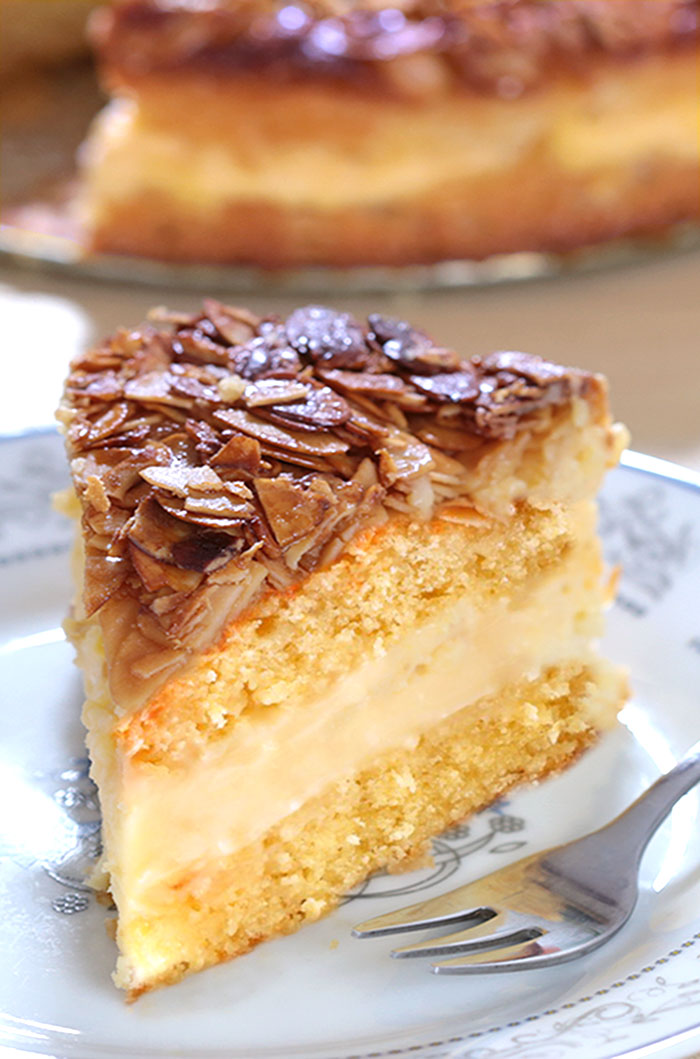 How to make Bee Sting Cake ?

Don’t be scared off by all of the steps in this recipe!

It’s really quite easy to make. First you make the dough, then the honey almond topping. While the cake is baking, prepare the filling. After the cake has cooled a bit, assemble the cake, let it chill for an hour, and then enjoy!

The Brioche dough will need to go through two risings, therefore allow enough time in the day to complete the rising steps and baking.
The Pastry Cream can be prepared the day before, however it is best if eaten within three days, if you like you can light it with whipped cream, or with egg whites. Or if you are short on time you could use packaged pudding mix instead.
When assembling the cake, cut the top layer into 9 to 12 wedges, depending on how many people you are serving, and reassemble the wedges on top of the Pastry Cream layer.
Precutting the top makes it easier to serve the cake so the Pastry Cream doesn’t squish out while cutting the cake. 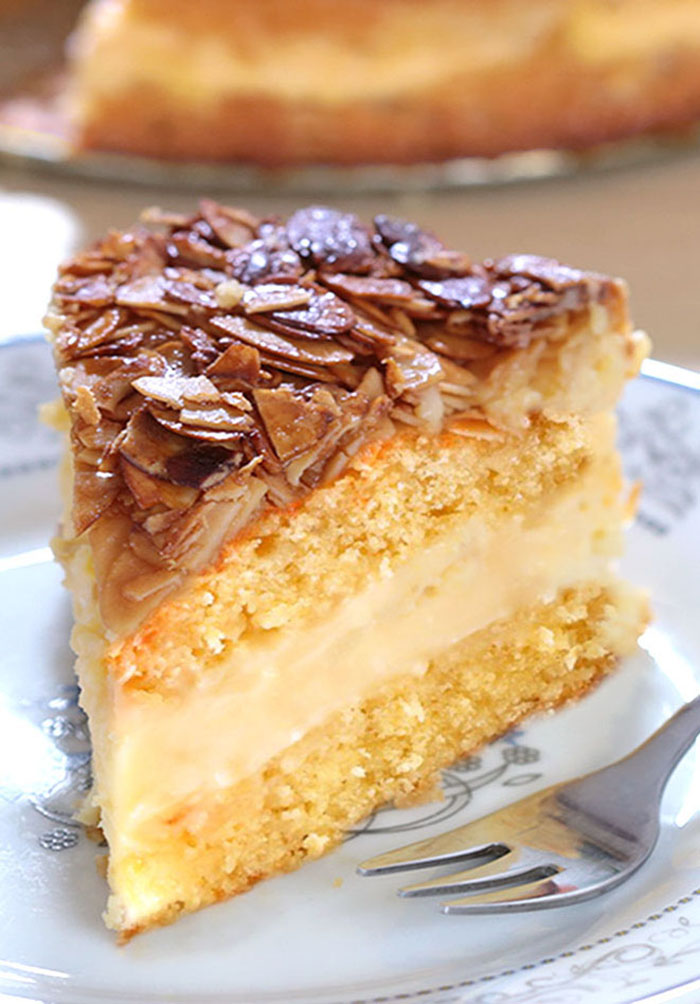 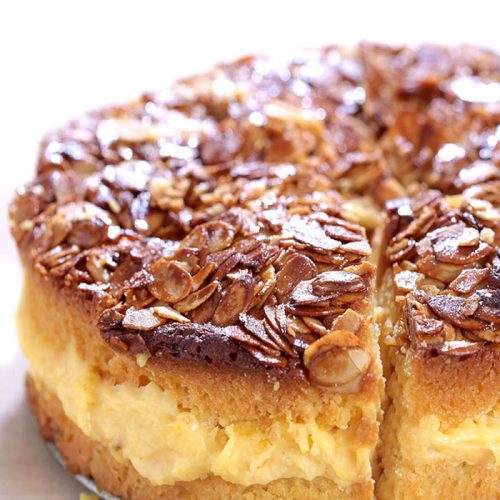 * If you want to lighten the pastry cream. Beat remain egg whites, adding the salt, until stiff peaks form. Fold egg whites into the yolk mixture. 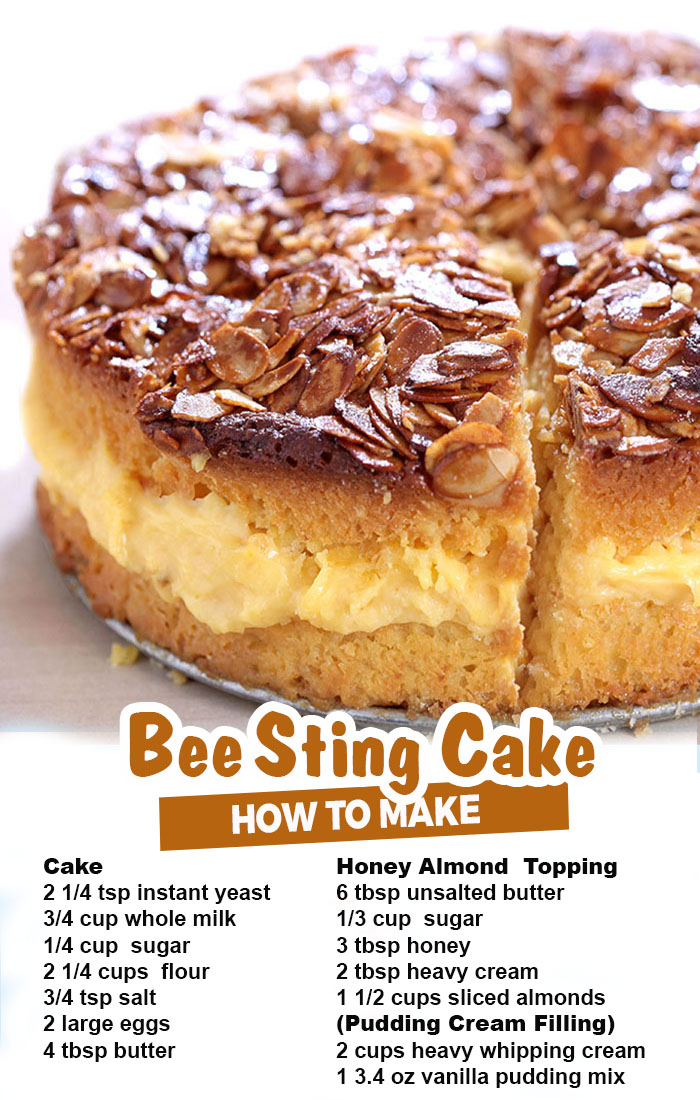